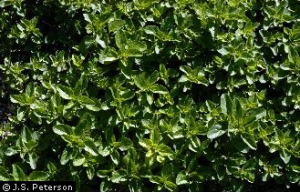 Wild Marjoram (Origanum vulgare) has been used since ancient times as a remedy for poisonings with narcotics. One of the features of this plant that enables such a detoxification is that it is a “diaphoretic” which means that it will cause sweating. It is also a carminative, which is used for control of gassiness in the gut. And it is mildly stimulant, although not nearly so strongly as coffee or black tea (Camellia sinensis).

Marjoram has been used to return menses to a woman who has stopped menstruating, and it is has been used as a poultice to relieve toothache.

Tension headache responds to a tea made from the fresh leaves of marjoram, in which the volatile oils are released.

Learn about how we use different natural methods to treat cancer at NatureWorksBest.

Dr. Colleen Huber is a licensed Naturopathic Medical Doctor and Fellow of the Naturopathic Oncology Research Institute (NORI). She has an active natural cancer cancer clinic, where people come for treatment from all over the world because of her 90% success rate; the highest known cancer treatment success rate in the world. Dr. Huber graduated from and then taught at Southwest College of Naturopathic Medicine in Tempe. Her blog contains articles about cancer, alternative cancer treatments, nutrition, and natural lifestyles. Many of these articles have appeared on mercola.com, the world’s most visited natural health website. Dr. Huber’s book, Choose Your Foods Like Your Life Depends On Them, has been featured on four Arizona TV appearances and she has been featured most recently in the book, Defeat Cancer: 15 Doctors of Integrative & Naturopathic Medicine Tell You How. Her groundbreaking and successful alternative cancer treatments and cancer prevention diet have been covered on Channel 3 and Channel 5 in Phoenix. Her academic writing and original research on sugar & cancer has appeared in The Lancet and other medical journals, and received media coverage around the U.S. and Europe. Dr. Huber is one of very few naturopathic physicians/naturopathic oncologists in the United States to have been granted hospital privileges with full scope of practice as licensed in the State of Arizona.

Phone: (480) 839-2800
Email: office@NatureWorksBest.com
Open every day except Sunday and Wednesday.

Material on this site is for informational purposes only. It is not intended to diagnose, treat or cure any diseases or illnesses. The statements on this website have not been evaluated by the Food and Drug Administration.

Member Clinic of Compounding Physicians
Back to Top