Does the Baking Soda Cancer Treatment aka (Sodium Bicarbonate) Work? 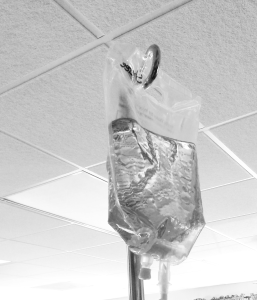 Dr. Tullio Simoncini is a medical doctor in Italy who has done more than anyone to explore the uses of the baking soda cancer treatment as an alternative cancer treatment. It is known that cancer creates and favors an acid environment and because of this, Dr. Simoncini and others have used sodium bicarbodate as an alkaline therapeutic agent.

The way that acidity seems to protect cancer is not fully understood.  It seems that cytotoxic T-cells, which may attack cancer cells under normal conditions, are inactivated in an acid extracellular fluid.[1]  Also, the type of acidity that cancer produces, i.e., lactic acid, stimulates vascular endothelial growth factor and angiogenesis.[2]  This is like a highway project, which enables a tumor to build the blood vessels that it needs to bring the nutrients for it to survive.  So the tumor creates an environment in which it can then exist comfortably.

At a pH of about 10, sodium bicarbonate is an antidote to this acidity.  It can be used clinically in sterile, intravenous form.  This is a liquid, sterile bicarbonate of soda.  The baking soda cancer treatment is well-tolerated, even with frequent repeated dosing.

We will often recommend that some of our cancer patients take ¼ to ½ teaspoonful in water orally a few times per day as an adjunct to our therapies.  This is not suitable for everybody, and may have repercussions in various organ systems if taken to excess.  We are not advising anyone to do this unless they have been a patient at our clinic, and we recommend it to specific individuals.  Also, there is risk of aluminum contamination with some available brands of baking soda, so one must be cautious with this.

A Concurrence Between Cancer And Candida

Earlier researchers have found a concurrence between cancer and candida.  In Dr. Simoncini’s book, Cancer is a Fungus[3] he notes some similarities between the two.  Primarily, both are intractable diseases, each very hard to get rid of.  Dr. Simoncini notes that each forms a solid mass of low penetrability, unlike the dispersed forms of bacterial and viral infections in the body or body fluids.  Dr. Simoncini notes the problem of surface area in addressing these infections.  Whereas bacterial and viral infections are dispersed in the solutions of bodily compartments, and likewise, antibiotics and other anti-microbials dispersed in the same solutions have access to each microbe.

A solid mass on the other hand, is approached by one of two routes: either the most superficial layer of the outer surface, or by way of any blood vessels that course through it.

In the case of a neoplasm, the approach of approximating the most superficial layer has the effect of challenging the survival of the cancer only enough to induce the genetic changes that make the tumor more resilient to further assault by the same or similar agents.

Therefore, a productive route to the core of the cancer, a more threatening assault on its survival, is by way of the bloodstream which is why IV’s are utilized for the baking soda cancer treatment.

Is Cancer A Fungus? Does Baking Soda Work on Cancer?

As for whether cancer is fundamentally a kind of fungus, the jury is still out.  However, it is useful to know that not only does sodium bicarbonate disrupt the comfortable environment of tumors, but it also has anti-fungal effect.[4]

For the cancer patient, sodium bicarbonate by intravenous infusion, is given by a practitioner who is knowledgeable and experienced in this area, has been helpful to provide an environment that is unwelcoming to cancer.  Therefore we hope that this will become a more commonly accepted practice in cancer treatment. If you are interested in learning more about our cancer treatments, please give us a call or set up an appointment at our Tempe, Arizona office you can reach us at 480-839-2800.

Dr. Huber Was Featured in a New Documentary “Cancer Can Be Killed” Watch Part of It Now!

Have any questions or comments?  Let us know in the comments section below!

Dr. Colleen Huber is a Naturopathic Medical Doctor in private practice in Tempe, Arizona, and a Fellow of the Naturopathic Oncology Research Institute.

This site was designed by family members of someone who has now been victorious
over cancer for several years.

If you see on our pages an enthusiasm and upbeat feel, about what is typically a sad topic,
then what you are seeing is the joy of that family and the cancer survivors / victors
whom they got to know in our IV rooms.

GIVE US A CALL, WE'RE FRIENDLY!

Open every day except Sunday and Wednesday.

Material on this site is for informational purposes only. It is not intended to diagnose, treat or cure any diseases or illnesses. The statements on this website have not been evaluated by the Food and Drug Administration.

Member Clinic of Compounding Physicians
Back to Top